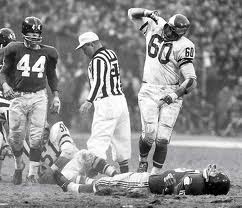 Like quarterbacks with great offensive lines, self identified pro-life Dems who actually weren’t pro-life at all ran the political field almost without fear for years. But last night the pro-life Susan B. Anthony List went Butkus on them. Last night, the SBA List brought hurt like Santa brings toys.

The SBA List raised and spent millions in ads so awesomely awesome that at least one Democrat (Steve Driehaus) sued. The SBA List was even threatened with jail time. JAIL TIME! And how did the SBA respond? They didn’t just take away Driehaus’ job. They took away the jobs of fourteen of his friends too.

Dick Butkus just made quarterbacks lose consciousness for a few minutes. The SBA List did much worse. They took away their opponent’s jobs. No, they took their jobs and found other people to do them but better.

And just in case Dems calling themselves pro-life didn’t get the message, the SBA List put out a press release (aka -a warning) to ensure they understood:

Today, the Susan B. Anthony List announced that it successfully defeated 15 of its 20 targeted self-described “pro-life” Democrats who voted for the pro-abortion health care bill as part of its “Votes Have Consequences” project.

“Last night, the SBA List accomplished its overall goal and delivered on our promise that votes have consequences,” SBA List President Marjorie Dannenfelser said. “In these races, the abortion issue was a determining factor. We flexed the muscles of the pro-life movement. Our project started more than a year ago when we targeted these districts to strengthen pro-life Democrats’ resolve to vote against abortion funding in health care reform. When the so-called ‘pro-life’ Democrats caved, our mission had to change. By defeating 15 of 20 these self-described pro-life Democrats, we have sent a clear message to Washington that voting against the deeply held pro-life views of your constituency has serious political consequences.”

Remaining pro-life Dems in name only are currently looking for a change of underwear.

And make no mistake, just like every quarterback knew exactly where Butkus was on every play and imagined all the horrible things he was going to do to them when he got into the backfield, pro-life Dems will be very wary of crossing the SBA List. Because the SBA won’t just break into the backfield, they’ll break into the huddle, kneecap your fourteen best players and start calling plays. Dems now know that if they double cross pro-lifers, this is what they’ll see right before their jobs are taken away from them:
Oof!