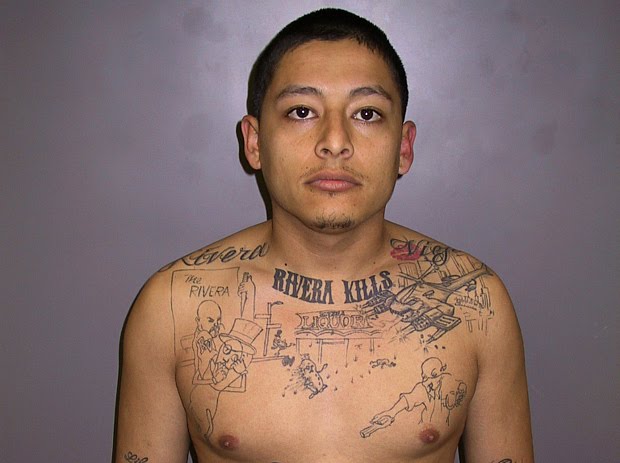 You ever watch the show “Prison Break?” Essentially, it’s about a dude who gets himself arrested and put into prison so that he can break out his brother who’s been wrongfully convicted. All over his body, the hero tattooed the blueprints for the prison as a map to escape the prison.

Well one California criminal used his tattoos to get him INTO prison. For a loooong time.

Then one caught his attention.

Inked on the pudgy chest of a young Pico Rivera gangster who had been picked up and released on a minor offense was the scene of a 2004 liquor store slaying that had stumped Lloyd for more than four years.

Each key detail was right there: the Christmas lights that lined the roof of the liquor store where 23-year-old John Juarez was gunned down, the direction his body fell, the bowed street lamp across the way and the street sign — all under the chilling banner of RIVERA KILLS, a reference to the gang Rivera-13.

The police investigated and now the guy’s in the can for murder.

OK. It’s not like I want to help murderers or anything but guys, come on. Rule #1 for murderers -Do NOT under any circumstances draw pictures of your crime. But if you feel you must, then do not draw a picture of your crime permanently on your body. Try a piece of paper which you can immediately burn or otherwise destroy. If you’re an artistically minded murderer perhaps you could create a paper mache still life of your crime…which you could immediately destroy after completing it.

Dude, use your head.

If I ever meet this guy I vow to say, “Man that’s a killer tattoo.” And then I’ll run.