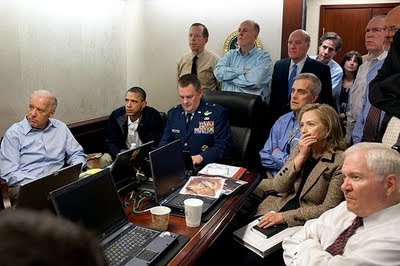 A few related thoughts on the story of the week,

In a world in which war is conducted from office chairs, a lot of humility is required. A lot of humility. I would say that from what I know, that President Obama showed good judgement on the lead up to the operation. This photo seems to indicate that the President knew the gravity of the orders he gave. Good.

I do worry, however, as we now target Qaddafi in Libya as well, that office chair warfare is just too easy. Some of the post-facto comments by Obama aides tend to reinforce my concerns. Even if you are sitting in the Sit room at the White House, orders and operations such as these kill people. Sometimes they are the intended target, such as Osama. Other times it is the grand-children of the intended target. Same orders, different outcomes. Such things should never be taken lightly, especially by those in air-conditioned offices.

There is a scene from the movie Patriot Games in which special-ops personnel are taking out a suspected terrorist camp on Jack Ryan’s say so. The reality of it can be seen on Harrison Ford’s face when he looks at the cavalier attitude of an office chair warrior. This is the scene that came to mind as I heard the details of the raid.

May we always understand what it is we are doing.