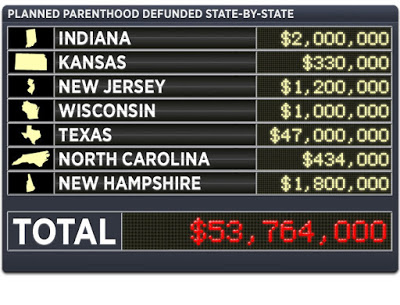 The Susan B. Anthony List goes after Planned Parenthood like it’s their job. ‘Cause it kinda’ is. But they seem to really enjoy their work.

The SBA List has been at the forefront of the Defund Planned Parenthood movement and that movement is scoring a major victory today.

Today, the state of Texas passed SB 7 which, along with the recently passed budget, “would strip an estimated $47 million from Planned Parenthood clinics in the state,” according to the SBA List.

The bill is now on its way to Governor Rick Perry’s desk where it is expected to be signed into law. So powerful will Perry’s signature be that it is rumored to possibly cause all the symptoms of irritable bowel syndrome for President Barack Obama from thousands of miles away. Many people thought Rick Perry looked pretty awesome before but this is like finding out that Perry, as well as acting as Governor by day, has also been fighting crime at night as The Batman.

This isn’t just a regular ol’ smackdown of Planned Parenthood. This is a $47 million smackdown. And let me tell you something -in this economy $47 million buys you a lot of smackdown.

“Once again, the pro-life grassroots have fought and won another battle at the state level to defund Planned Parenthood,” said SBA List President Marjorie Dannenfelser. “The list of states taking up the cause of preventing taxpayer dollars from being used to fund the nation’s largest abortion provider is growing, and so is the list of states where those efforts are wildly successful.”

So hardcore and efficient has the Defund Planned Parenthood Now Movement been that the SBA List was having a hard time keeping track of how much beatdown they helped to deliver so they’ve actually come up with a scoreboard to keep track with a state by state breakdown.