Obama Wasn’t On The Bus 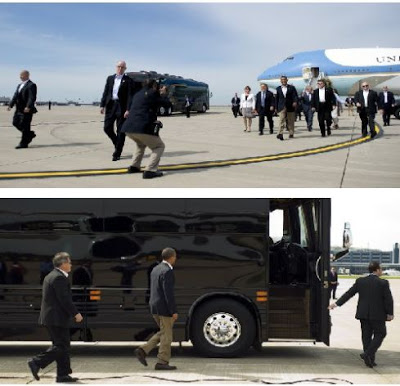 Wow. This is too awesomely awful and stupid to check.

Remember those million dollar buses that President Obama used to tour Iowa the week before last? You might, he won’t. That is because he wasn’t actually on the bus.

This is really disgusting! The so called “Bus Tour” was not a bus tour at all !

An AP reporter said that Obama might have ridden these expensive buses only one mile at each stop. Therefore, it wasn’t really a “BUS TOUR”! Obamaspent most of the “BUS TOUR” on an airplane traveling between stops. Itlooks like Obama has scammed the American people again……..with the help of the liberal media. It’s no damn telling just how much this “show” cost the American taxpayer.

President Barack Obama (C) walks to his bus as he arrives in Minneapolis-St. Paul International Airport, Minnesota, August 15, 2011, where he is to begin his three-day bus tour in the Midwest centering on ways to grow the economy.

He FLYS into an airport somewhere in the midwest, hops into a brand new 1.1 Million $ bus, paid for by you and me, for a “bus tour” ‘around the midwest’, and after an hour or so, gets driven back to the airport for ANOTHER FLIGHT, lands at another airport where another 1.1 Million $ brand new black bus is waiting for him… and repeats all that until his midwest bus‘tour’ is done?? Oh yes……and THEN he leaves on a 12 day vacation to Martha’s Vineyard…….to REST UP from this campaign bus tour!

So by my estimate, Obama (Man of the people) cost American taxpayers about a $100,000 per mile of actual bus time. Nice. Media coverage of this travesty? Zilch. Nice.

You know what liars do? They lie, that is what they do. Obama just does it more expensively than most.