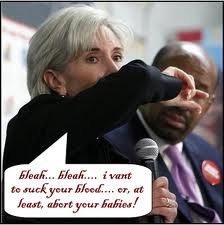 We know how vampires don’t like daylight. Well, the bishops and now a group of U.S. Senators are pulling HHS Secretary Kathleen Sebelius out into daylight. And yeah, Sebelius is the vampire in this scenario.

Never before have we seen an administration so committed, so obsessed with destroying human life. And because the strongest group standing against them is the Catholic Church, the administration has shown that it knows its enemy.

In their public letter, the Senators write:

As you know the USCCB held a federal contract from 2006-2011, during which time the organization provided food, housing, clothing, medical services, counseling, legal assistance, education, and employment services to victims of human trafficking in over 44 states.

In 2011, your department’s solicitation for grant applications to administer the program indicated a new preference for grantees that would offer “the full range of legally permissible gynecological and obstetric care,” representing favorability toward organization that refer victims for abortion services. Your department subsequently denied USCCB an award despite outstanding reviews for its services to human trafficking victims and their families over the past five years.

The bishops have received nothing but good marks for their work with sex trafficking victims but because they won’t refer for abortion. So, for that the HHS is pulling funding.

Sebelius and Obama are obsessed with aborting babies. Obsessed. Remember, they could’ve had Obamacare passed a year earlier than it did but they had to have abortion in the program. Or else it was a no-go. For a year, they held off on Obamacare (which they claimed was their top priority) just so they could include federal funding of abortion.

This administration is showing itself to be not only anti-life but anti-Catholic.

The GOP Senators, including Marco Rubio and Roy Blunt, seem willing to take this fight on and expose the administration’s anti-Catholicism into the daylight. Let’s hope it works.