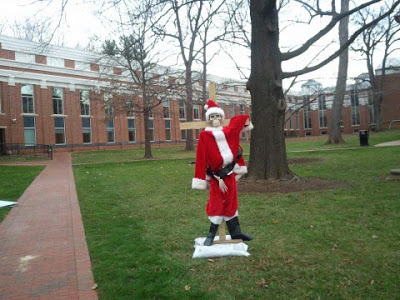 An atheist group in Virginia crucified a skeletal Santa as a way of showing…well I’m not really sure what they were saying to be honest.

The Loudon Times of Virginia reports:

It’s that time of year again, where holiday cheer fills the air and the Loudoun County Courthouse lawn is scattered with potentially offensive displays and outraged citizens.

But one display has already received some extra attention. The display in question may have been spotted on the way in to Historic Downtown Leesburg where a skeleton Santa is on a crucifix, but it was later torn down by a vandal around noon on Dec. 5.

According to Rick Wingrove, president of the Virginia Chapter of American Atheists, the skeleton Santa was dismantled by a woman as a Loudoun County Sheriff’s deputy watched.

According to Loudoun County Sheriff’s Office Spokesman Kraig Troxell, the dismantling of the skeleton Santa displayed occurred around noon on Dec. 5.

I’m not sure what they were trying to get across here at all. It just seems so adolescent to me. But it seems that just like adolescents they don’t really have a well thought out point so they just act out for attention.

But what else would you expect from people who define themselves by what they are not, rather than what they are.