A Santorum Victory! Who Else Won? 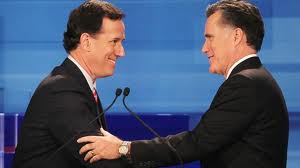 And here’s the thing -it’s possible that things only get better from here for Santorum. Possible. You’ve got Rick Perry flying back to Texas as we speak to reassess his candidacy. Where do his voters go? Seriously. Do they go to Mitt? Not likely, considering that many of Perry’s supporters are Anybody But Mitt folks (ABM’s). Many will likely go to Santorum. So there’s a chance that as other candidates call it quits, it could become a race between Santorum and Mitt.After new Hampshire, that is. Mitt will clean up in New Hampshire. But after that, I could absolutely see things shaping up to be a Mitt vs. Rick thing. Newt’s probably going to hang around a while as well.

But there’s a lot of racing to be done all across the country. But hey, let’s face it. As of a few weeks ago, Rick Santorum was at less than five percent in the polls and now he’s THE STORY. There is a path to the nomination for him after last night. I’m not saying it’s a clear path because it’s not. It’s got obstacles and there’s still a lot of race left. But there’s a path.

Now, as far as Mitt goes. The dude just won Iowa. He’s got to be thrilled. Iowans are not really supposed to be his peeps. But he won and now he’s going into New Hampshire. And let’s remember, Mitt’s got him some mad cash. And if he targets Santorum with some nasty negative ads, it’s going to take its toll. Mitt may be thinking that he’s watched the parade of ABM’s come and go. Bachmann, Cain, Perry and Newt all spiked for a while. But after a while and a few negative ads they all went away. Mitt’s got to be smiling today.

As far as Newt goes, I’m pretty sure he’s looking forward to two nationally televised debates this week on Saturday on ABC and on Sunday morning on Meet the Press. I don’t think it’s a coincidence that Newt’s candidacy peaked while all the debates were going on and then plummeted after the last Iowa debate on the 15th. The more debates the better for Newt. I wouldn’t count him out.