You blow my mind! Hey Ricky!

Rick Santorum is the miracle man and it’s time for Newt to scoot.

Former Pennsylvania Sen. Rick Santorum won the Alabama and Mississippi primaries Tuesday, pulling off another pair of surprise victories and boosting his claim to be the conservative alternative to Republican front-runner Mitt Romney. 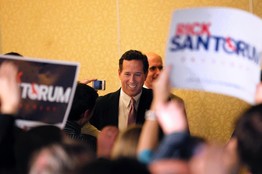 Former House Speaker Newt Gingrich, who built his campaign around the Southern strategy, appeared headed to a second-place finish in both states while Mr. Romney was trailing slightly in third.

Updates with some quotes from pro-life leaders:
“Despite attempts by some opinion makers to cast Rick Santorum’s strong support for women, the unborn and the family in a negative light, his wins in Alabama and Mississippi, as well as in Tennessee, Oklahoma and North Dakota last week show social issues are winning issues,” said Marjorie Dannenfelser, President of SBA List. “Voters in Alabama and Mississippi reflected upon who represents and has already fought for their values. They chose Santorum. That’s why he is winning.

“Rick Santorum’s leadership on life, marriage, and religious liberty are clearly a key part of what is sustaining him as a national leader,” said Maggie Gallagher of the Culture War Victory Fund. “He is not a regional candidate. He is competitor in the Midwest, the west mountain states and the South. That’s because voters trust that his core values are their core values.”