Rowan Williams to Step Down 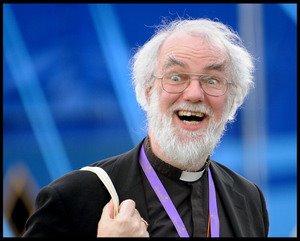 The “leadership” of Dr. Rowan Williams seems to be coming to an end.

Archbishop of Canterbury Dr Rowan Williams has announced he is to stand down in December.

He will take the position of Master of Magdalene College at the University of Cambridge from January next year, his website says.

In a statement on his website, the head of the 85 million-strong Anglican Communion said serving as archbishop had been “an immense privilege”.

He said stepping down had not been an easy decision and that during the time he had left there was “much to do”.

Dr Williams thanked those in the Church of England and the wider Anglican Communion who had “brought vision, hope and excitement” during his ministry.

In a more in-depth interview, Dr Williams reflected on growing divisions within the Anglican Church, and said it seemed some conflicts would not go away “however long you struggle with them”.

Under his leadership, the Church of England has come close to splitting over the ordination of gay clergy and women bishops. Dr Williams has consistently supported the ordination of women, and previously showed no objection to the appointment of an openly-gay bishop in Reading.

Dr Williams also reflected on his controversial remarks in 2008 that adoption of certain aspects of Sharia law in the UK seemed “unavoidable,” saying he stood by his argument.

You can walk down memory lane with us at CMR stories concerning Dr. Williams.

Ah, remember when he pretty much called Shakespeare a jerky Catholic.

How about when he said the Catholic Church had lost all credibility.
His communion service for gay clergy.

In many ways Dr. Williams has been a catastrophe. It’ll be interesting to see who his successor is.