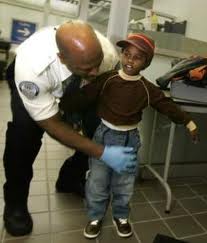 You have got to be kidding me.

A Catholic priest who was defrocked for allegedly sexually abusing young girls was hired by the Transportation Security Administration before his background check was complete and has worked at Philadelphia International Airport for the last 10 years.

Thomas Harkins joined the TSA in 2002 after resigning from the priesthood the same year. According to the Philadelphia Inquirer, the TSA hired the former priest before completing a background check. The Diocese of Camden revealed to the TSA in 2003 as part of the background check that Harkins had been removed from his ministry in the diocese because of allegations he had molested two girls in grade school.

The TSA is saying that he isn’t the dude patting people down but who knows what goes on. You think there’s any way they’d admit that this guy was patting down children.

To be fair, charges were never filed against the former priest but the archdiocese paid $195,000 in civil suits. Shouldn’t something like that be taken into account? I mean, Michael Jackson was never convicted of anything but I wouldn’t let my kids go play in Neverland with him and Corey Feldman.

This kind of thing happens because of the litigious society we live in. I’m sure the TSA knew but they also knew that he wasn’t charged so they couldn’t not hire him because of it. Otherwise he could sue. So in order to avoid a lawsuit this guy gets a gig in a position of authority over people.

Everything you read about people who molest children indicates they very rarely get better. Very rarely. Can’t we just have some common sense about this kind of thing. Some?