They Replaced the Christmas Tree with…This? 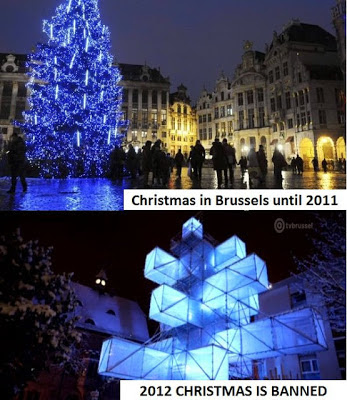 The traditional Christmas tree will no longer be lit in downtown Brussels because some may find it offensive.

Here’s the tree that’s stood in the town square for years and below is it the neon-ish horror that replaced it:

According to reports, it’s being called an “electronic winter tree,” and it will take the place of the traditional Christmas Tree and Nativity scene at the city center of Grand Place, reports Brussels News.

Muslims make up 25.5-percent of the population of Brussels and is a growing population.
Reportedly, two Muslims elected to the Brussels city council last month have vowed to turn Belgium into a Muslim state based on Sharia law.

It’s at least a little ironic that those who seek to wipe out Christianity and those who preach tolerance are on the same side.

HT and Pics from The Eponymous Flower