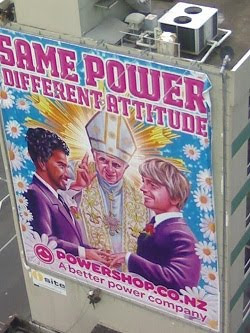 One thing about the left is they show you where they’re going quite often. They deny it but they show it. Make no mistake, eventually the push for gay marriage will be about forcing churches to perform same-sex marriages.

Look, the Church was forced to drop their adoption services altogether in some cities because the cities were forcing them to allow for gay adoption. Anyone actually think the “right” to marry whoever you want will stop at the Church’s doors.

You gotta’ love how politically correct the billboard is too, showing a white guy marrying a black guy.

The left is constantly carping about tolerance and kindness. But when it comes to the Church and the Pope, all bets are off.