The Fake Christian Priests in Japan 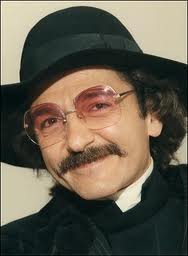 It turns out that Japanese people like Christian weddings but not all that Christianity. So what needs to be done? Fake priests. I guess they’re kinda’ like Unitarians but without being so serious.

Christians make up only 1.4% of Japan’s 127 million population, but Western “white weddings” now account for around three quarters of all bridal ceremonies, which means Christian priests are in high demand. To meet their clients’ expectations bridal companies have given up on trying to find ordained ministers and have kept requirements to a minimal – men looking foreign-enough to pass as Christians who can speak a little Japanese and perform the ceremony in 20 minutes.Japan’s love affair with Christian wedding is believed to have started in the 1980s with the televised weddings of Prince Charles and Lady Diana and was fueled by the nuptials of Japanese pop star Momoe Yamaguchi. People, women especially, were attracted by the idea of celebrating their marriage through a ritual that revolved around love and that elevates the bride to the status of princess even for a short while. Traditional Shinto weddings, on the other hand, encase women in a wig and kimono, and are focused more on the merger of two families. The Japanese simply fell in love with the sharp dress code, the kiss and the overall image of Western weddings over their centuries-old traditions. But in order to have a genuine-looking ceremony, they wanted Christian priests, which were pretty hard to find. That started the now famous “foreign fake pastors” trend that saw companies and hotels hiring average foreign gentlemen with minimal knowledge of the Japanese language to perform Christian weddings.

One doesn’t even need to be Christian in order to carry out the task. In fact, the less religious the pastor, the better. The words spoken during a Western-style wedding are important, but companies are just looking for nonreligious guys who can stick to a script, because they realize for the average Japanese this kind of ceremony is more about the image rather than the essence…

So they want the image of Christianity but none of the rules. Dude, that’s not Japanese, that’s American.