NYT”s Kristof Wonders if Animals Might Be Our Moral Superiors 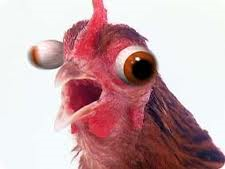 Oh, and by the way he’s still cool with eating the morally superior animals. What? Nothing tastes better than chicken with some moral superiority sauce.

The nobility of geese was most on display at execution time. My job as an 11-year-old when we beheaded the geese was to capture a bird and take it to the chopping block as my dad wielded the ax.

So I would rush at the terrified flock and randomly grab an unlucky goose. The bird in my arms would honk in terror and try to escape, and the other geese would cower in the corner of the barn.

Then one goose would emerge from the flock and walk tremulously toward me, terrified but unwilling to abandon its mate. It would waddle after me toward the chopping block, trying to honk comfort to its mate.

Even as a child, I was awed. This was raw courage and fidelity — and maybe conjugal love, although it sounds hokey to say so — that made me wonder if these animals were actually our moral superiors.

Maybe my farmboy recollections reflect anthropomorphism or soggy sentimentality. But, in the last decade or so, scientists have conducted experiments that tend to confirm the notion that poultry are smarter and more sophisticated than we give them credit for.

I love when pro-abortion rights people defend animals. It smells like moral idiocy.