OJ To Become Preacher. Wait, What? 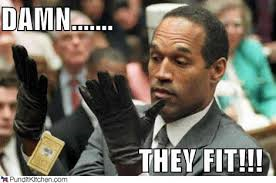 As far as OJ goes, hey, a true conversion would be a wonderful thing. But I’m thinking that a little confession would be a good place to start. I don’t think anyone believes a word this guy says until he tells the truth about the murder of his ex-wife.

“O.J. is very religious now, and he’s been counseling other inmates with Bible studies for months,” his manager Norman Pardo told The ENQUIRER.

“When I talk to him on the phone, all he wants to discuss is religion. He’s obsessed!”

The 66-year-old felon has been in the Lovelock Correctional Center since December 2008 on an armed robbery and kidnapping conviction. But behind bars, pals say Simpson claims he’s cleaned up his act and is focused on launching a worldwide crusade called “Holy Safari.”

“O.J. will tell you that he wants to bring people together, but that’s BS as far as I’m concerned,” said an insider. “There’s a lot of people send­ing bucket-loads of money to these TV preachers, and O.J.’s just looking to rake in millions from poor, unsuspecting Christians.

“It’s a dangerous idea to think of Simpson as a self-styled prophet who can reach people all over the world.”

And maybe the first act a preacher makes shouldn’t be requesting money. I’m thinking this guy should learn some humility and work out his salvation with a little fear, trembling, and humility.

I’m getting the feeling with OJ that he thinks he’s a little more clever than he is. He seems like a guy who was amazingly good at the first thing he really tried to be good at and has spent the rest of his life stunned that everything else isn’t just as easy.