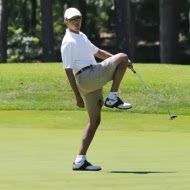 Sometimes the media just nails something so well. It’s likely unintentionally but whatever. Check this out from USA Today:

President Obama and his family attended Sunday services at St. John’s Episcopal Church, which is across Lafayette Park from the White House.

It is a day for reflection, not politics.

When a pool reporter asked if the Obamacare website can be fixed by the end of November, Obama responded: “C’mon guys. I’m going to church.”

During the service, seminarian Sarah Taylor offered prayers “for Barack, our president, the leaders of Congress, the Supreme Court, and all who are in authority, for Afghanistan, and the Middle East, for this community, the nation and the world.”

After church, in the afternoon, Obama took a motorcade to Fort Belvoir, Va., for a round of golf.

You’ve got to think that’s a dig from the media, right? Now I’m not thinking they’re turning on their precious president but it’s nice to see them at least poke the emperor once in a while.