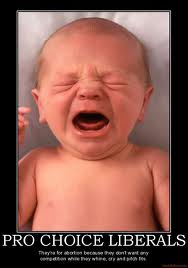 I see a lot of blogs and talking heads going after President Obama and saying that they can’t wait until he gets out of office. But the thing about the Democrat party is that it doesn’t matter who leads it. It’s like the Borg. They’re all assimilated. It truly is the party of death.

The HuffPo is celebrating because a bunch of Democrats from the House and Senate announced that they’re getting pretty darn sick and tired of people voting for restricting abortions in any way. To ensure that no pesky state legislatures or people vote for any abortion restrictions, they’re introducing a bill to make it illegal to do so.

Following an unprecedented three-year wave of state legislative attacks on abortion and family planning services, a group of Democratic lawmakers in the House and Senate plan to go on the offensive Wednesday with a historic bill that would make it illegal for states to chip away at women’s reproductive rights.

This bill would just make you have to believe what they believe. It’s called being assimilated. Welcome to the Borg.