Is This Frescoe Proof of Womynpriests? 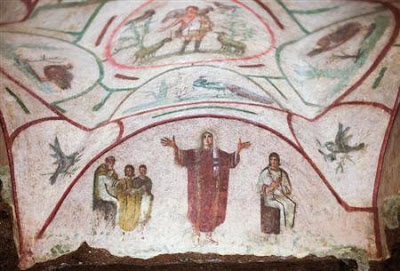 A newly restored catacomb in Rome has a number of frescoes that some are pointing to as evidence of womynpriests in the early Church.

It’s not. But that’s not stopping them from pointing to it.

Organizations promoting a female priesthood, such as the Women’s Ordination Conference and the Association of Roman Catholic Woman Priests, have pointed to these ancient scenes as evidence of a female priesthood in the early Church.

But the Vatican contests these interpretations which have also appeared in books on women in Christianity, such as the “The Word According to Eve” published in 1998.

“This is an elaboration that has no foundation in reality,” Barbara Mazzei of the Pontifical Commission on Sacred Archaeology told Reuters at the presentation of the restoration on Tuesday.

“This is a fairy tale, a legend,” said Professor Fabrizio Bisconti, superintendent of religious heritage archaeological sites owned by the Vatican, including numerous catacombs scattered around Rome.

He said such interpretations were “sensationalist and absolutely not reliable”.

Bisconti said the fresco of the woman in a gesture of priest-like prayer was “a depiction of a deceased person now in paradise,” and that the women sitting at the table were taking part in a “funeral banquet” and not a Eucharistic gathering.

But that’s not going to stop those in favor of ordaining women from pointing to the pictures as evidence. I’m always a little confused about their arguments because at one point they say that Jesus just couldn’t have named a woman to be one of the apostles because everyone would’ve totally freaked. Yeah, because you know, Jesus was all about saying whatever it took to get treated nicely, right?

But then they argue that the very early Church had women priests. Well, which is it?

In his 1994 apostolic letter on ordination, Pope John Paul II made it clear that the church’s ban on women priests is not open to debate among Catholics.