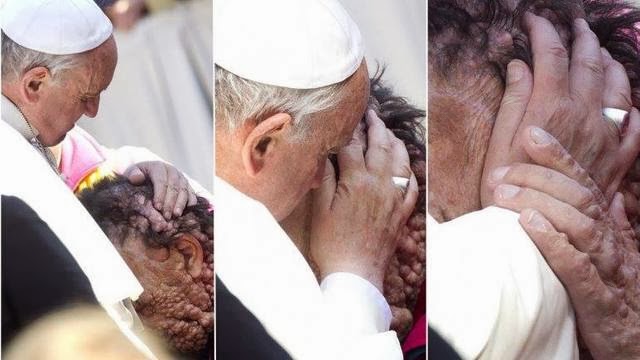 A Mormon woman is saying that she wishes the Mormons had a pope. And not just any pope. She’s jonesing for some Pope Francis. Well, here’s the thing. He can be your pope too. RCIA classes are starting all the time.
Jana Riess writes:

“I have Pope Envy,” I confessed to a Catholic friend recently over breakfast. She understood at once. The way Pope Francis has re-energized the Roman Catholic Church in just eight months is nothing short of astonishing, filling pews with lapsed Catholics and generating good will everywhere he goes.

As the Archbishop of New York put it, “If I had a dollar for every New Yorker, Catholic and not, who has told me how much he or she loves our current Holy Father, I’d pay off the big repair bill of St Patrick’s Cathedral!”

As a Mormon, I’ve delighted in seeing this beautiful revitalization of hope in the Catholic Church, but I’ve also felt twinges of (an admittedly un-Christian) envy.

I don’t know if this is a thing or it’s just one writer. I’m betting it’s probably a thing. To see the sudden turnaround of people’s view of the Church as a whole is pretty dramatic. It really is.

But here’s the issue I’m having. Are people envious of the message of love Pope Francis is so clearly promulgating or is it that he’s getting mad love from the media? Do you wish you had a leader like Pope Francis or is it that you wish the media would fawn over your religious leaders too.

Look, no knock against Mormons on this. Those guys have been battered in the media almost as much as the Catholic Church in recent years. Heck, there’s a play that mocks Mormons on Broadway right now and it’s all the rage. I think it’s even won awards. So it’s no surprise some would be jealous of this sudden turnaround in the media as to how they treat the Catholic Church. No surprise they’d be thinking “how do I get me some of that?”

But be assured that this affection for Pope Francis will not last. The media likes him now because they’re hoping he’s going to make drastic changes in the Church, to “modernize” it as they say. Let’s face it, that’s the way to receive wonderful media coverage. Agree with the New York Times, and you get praised by the New York Times. It’s not a difficult concept.

Pope Francis does not agree with the Times. Eventually, they’ll realize that. And the long knives will come out. And they’ll wonder if the Vatican is pressuring him or they’ll say he’s too old to make the needed changes. Something like that. But the hate will begin.

I love Pope Emeritus Benedict XVI. I love Pope Francis. And it’s not because of the media coverage. I assume hatred when it comes to the media. When the Church gets some good press, I like it. I think it helps spread the message so I’m happy. But I’m not a fool (at least about that.) The media’s affection for the Church has a due date. I suspect it’s quickly approaching. That will not change how I feel about Pope Francis.