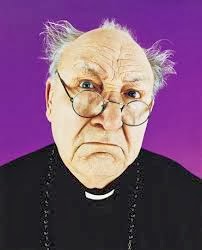 Two things us Catholics needed. A priest confusing Catholics about the Church’s teachings on sexuality. And more namecalling!

Fr. Bill Kenneally, Pastor Emeritus of Saint Gertrude Parish in Chicago, wrote a letter to the editor that appeared in The Chicago Tribune where he not only comes out in support of gay marriage but compared Bishop Paprocki to a Muslim terrorist.

I am a retired pastor of a Catholic church in Edgewater where there are many gay and lesbian couples, many of whom are doing their best to raise children as a family. I admire their constancy and care while they continue to belong to a church that “officially” seems wrongheaded and bizarre in its resistance to legalization of same-sex marriage.

Lobbying and liturgical pyrotechnics are both costly and embarrassing. At times I have wondered why faithful Muslims do not distance themselves publicly from their fellow believers who perpetuate violence. I wish to distance myself publicly from the misguided efforts of Bishop Thomas Paprocki of Springfield and his rite of exorcism. God bless Gov. Pat Quinn and all who are trying to live a life of faithful love.

This kind of verbiage does so much damage. The interesting thing is that many people think that this is evidence that the Church is changing. That it’s become modern. But so many of these outrageous statements comes from retired priests or nearly retired priests. This kind of stuff, I suspect, is the last gasp of the 60’s. Fr. Kenneally was ordained in 1961.

When he retired the Chicago Tribune did a story on him that had this:

Inspired by the reforms of Vatican II between 1962 and 1965, he enjoyed his first several years serving in city parishes. “There was this open window that looked out on a church that looked very, very progressive at the time,” he said. “For a priest, those were the golden days where all these things that liberal theologians talked about were now part of the agenda of the church.”

But during the papacy of John Paul II, Kenneally, then an associate pastor at St. Nicholas Church in Evanston, sensed a new conservatism taking shape, and his frustrations began to fester. “The deck is stacked now. That’s what’s frustrating for me,” he said. “I don’t think liberal Catholics are considered anymore by the hierarchy. They’re thought of as some kind of pestilence or irrelevant.”

Despite his angst, Kenneally remained a priest. When he arrived at St. Gertrude in 1984, he immediately added a contemporary worship service in a gym that featured jazz, dance and other creative expressions–an effort to give lapsed Catholics and seekers an alternative point of entry into the church