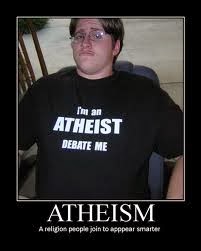 The world cries for faithful pastors not another p.r. strategist. Something tells me that if you told California pastor Ryan Bell that twerking with Miley would get him more attention, he’d do it.

It’s hard to seek out the Kingdom of God when you’re too busy hunting for a microphone.

The same clown who got all sorts of media attention last year by declaring there was no Hell, is now saying he’s going to pretend there’s no Heaven.

California pastor Ryan Bell has a novel New Year’s resolution. For one year, he proclaimed, he will “live without God.”

California pastor Ryan Bell has a novel New Year’s resolution. For one year, he proclaimed, he will “live without God.” Photo courtesy of Ryan Bell

It’s an odd resolution for an ordained minister, former church pastor, teacher at two highly regarded Christian universities and church consultant. Yet for the next 12 months, Bell, 42, plans to refrain from praying, reading the Bible and thinking about God at all.

Instead, he will read atheist authors, attend atheist gatherings and seek out conversation and companionship with unbelievers. He wants to “do whatever I can to enter the world of atheism and live, for a year, as an atheist.”

Still, his resolution is only an experiment — he is not, he said, an atheist. “At least not yet,” he wrote in an essay for The Huffington Post, where, on New Year’s Eve, he announced his plan and a new blog to document it.

“I am not sure what I am. That’s part of what this year is about.”

I don’t know what kind of following this guy actually had before other than media adoration. I’m assuming he’s done after this. Say at the end of this he decided to say he’s an atheist, then who cares. His effectiveness to the media is gone. He’ll no longer be the Christian who undercuts Christianity. He’ll just be another atheist. Who cares?

But if he comes back and says he’s still a believer, then why would any Christian be interested in what this guy had to say? Who needs a pastor that proclaims the Good news who intentionally ignored the Good news for a year?

He can tell you how important God’s saving graces are, he can tell you that God is love and wants to communicate with each of us. But then why did you intentionally cut off communication with Him?

This isn’t evangelization. This is a plea for a book deal.