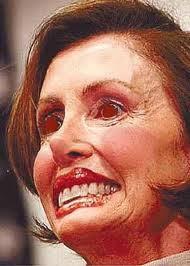 A group of self described Satanists in New York filed their application to erect a 7 foot tall statue of Satan at the Oklahoma state capitol.

OK. Seriously, this is the picture of the statue.

Something tells me these aren’t really “Satanists” but actually just litigious anti-Christians. You see, the state Capitol erected a Ten Commandments statue in 2012 and since then the ACLU and anti-Christian nutjobs (wait, is that redundant?) have been driven bonkers.

First came the lawsuits and now comes the Satanic statue. Makes sense, right? Once you’ve got lawyers and the ACLU gathering in one place, it kinda’ makes sense that Satan would show up eventually, right?

According to The AP the Satanic Temple spokesperson Lucien Greaves said in a statement “The monument has been designed to reflect the views of Satanists in Oklahoma City and beyond. The statue will also have a functional purpose as a chair where people of all ages may sit on the lap of Satan for inspiration and contemplation.”

That sounds snarky, not menacingly Satanic. You need more incantations and saying things like, “Riiiiisee, Riiiiiise!!!!”

Instead on its website, the Satanic Temple states that it “seeks to separate Religion from Superstition by acknowledging religious belief as a metaphorical framework with which we construct a narrative context for our goals and works.”

It also states: “Satan stands as the ultimate icon for the selfless revolt against tyranny, free & rational inquiry, and the responsible pursuit of happiness.”

So they’re Satanists who only worship a metaphorical Satan? Weak sauce. Kinda’ ends you up in the same place in the end though.