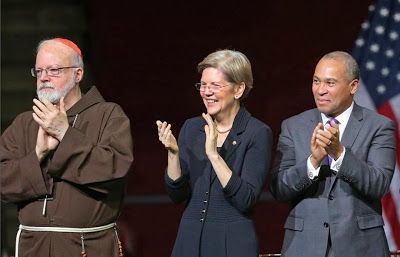 Cardinal Sean O’Malley was reportedly at pro-abortion and pro gay-marriage Boston Mayor Martin Walsh’s inauguration to pray but there he stood with pro-abortion Governor Deval Patrick and Senator Elizabeth Warren.

I’m not knocking the Cardinal. It’s just the kind of thing we see over and over again. Mind you, I’m not against him praying for Martin Walsh, Deval Patrick, and Elizabeth Warren. But this kind of visual just dispirits so many Catholics. And in this case, I’d strongly suspect that Cardinal O’Malley was simply being used as a political prop. Maybe not. But I suspect so.

To be fair, in that photo he could just be applauding yo-yo ma (who actually was there.) But it almost doesn’t matter as this photo will be used often, I’m sure. That’s the point. Coming there to pray is good but standing there and applauding next to prominent pro-abortion and pro-gay marriage pols is just not what Catholics need to see.

Leave a Reply to Our Lady of Good Success-pray for us. Cancel reply