Catholic Joe Biden Points Out A Sinner, Says “Bless Me Father For He Has Sinned.” 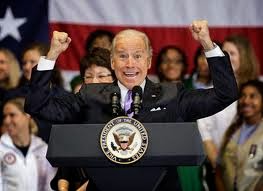 Remember when Joe Biden said, “The next Republican that tells me I’m not religious I’m going to shove my rosary beads down their throat.” Well, it turns out that he feels pretty darn ok with questioning other people’s faiths.

Vice President Biden went out of his way at a speech to the United Auto Workers union Wednesday to take on one of Pope Francis’ strongest critics.

“A couple weeks ago Ken Langone, who I don’t know, a billionaire founder of Home Depot, predicted that the pope — Pope Francis’ critique of income inequity will be, quote, ‘a ‘hurdle’ for very wealthy Catholic donors, who seem to think hurt feelings trump the teachings of the Bible,” Biden said, referring to a December interview with the Home Depot founder.

Langone claimed to CNBC that one potential major donor to a cathedral restoration project was concerned about Pope Francis’ economic rhetoric about capitalist economies.

“I’ve told the cardinal, ‘Your Eminence, this is one more hurdle I hope we don’t have to deal with. You want to be careful about generalities. Rich people in one country don’t act the same as rich people in another country,’ ” Langone said he told Cardinal Timothy Dolan of the donor.

Biden appeared amazed by the comments as a Democrat pushing the Obama administration’s income equality message. As the most prominent Catholic on the president’s team, Biden seemed to be personally offended by the comments.

“As practicing Catholic, bless me, Father, for he has sinned,” Biden said. He paused. “I mean, come on. Come on! What are we talking about today?”

So if you question a comment from the pope about capitalism, you’re a sinner. But if you dance in joy at the legalizing of abortion, you’re a devout Catholic…like Joe.