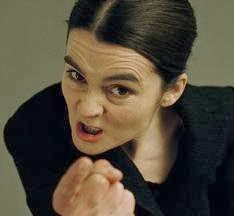 This would be hilarious if it weren’t so confusing. Some writer at RH Reality Check is absolutely bonkers angry that in a Super Bowl commercial Tim Tebow was portrayed as delivering a baby. Outrageous, huh? I know.

Tebow is a known anti-choice advocate, and T-Mobile’s decision to feature him in a Super Bowl ad delivering a baby communicates a profound disrespect toward women and those made vulnerable to harm by the restriction of reproductive rights. (That’s everyone.)…

But one thing the series did was depict Tebow as a neutral actor in the arena of birth, pregnancy, and reproductive health—of which he is not…

The decision to show him in a maternity ward, wearing a white coat, and coaching a pregnant woman in labor was a bad one. Depicting famously anti-choice spokespeople as experts, or even ordinary Joes, in the arena of reproductive health is not funny. It’s disrespectful.

So let’s play a little connect-the-logic-dots here. Tebow shouldn’t ever be portrayed as helping babies because he actually wants to help babies in real life!!! For realizes, that’s what she’s saying.

Hey, George Clooney, liberal nutjob in residence, played a pediatrician on television, but he’s pro-abortion. I don’t remember pro-lifers freaking out about that.

Here’s the thing. No matter what Tebow does, these looney tunes are going to freak out about. If he’s put in a good light at all, they’re not going to like it. But you’ve got to love how someone can believe that being pro-life makes you unable to discuss anything to do with babies. So, you know, the people having more babies can’t actually discuss all things babies.