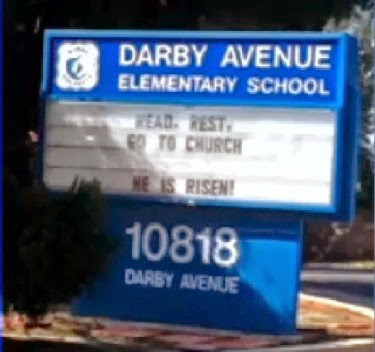 A local news affiliate actually did a story on the sign. Can you believe it? Of course, they located some outraged people.

“You’re talking [about] a public school where you have many religions and many faiths and many cultures and many who don’t even believe in God,” one person told the station. “So that would be very controversial.”

“It’s not a Catholic school. It’s not a Christian school,” another said. “You don’t mix that.”

“I don’t feel that it’s right,” someone else noted to KCBS. “I would have been offended if it was Jewish or Islam.”

Turns out that a teacher at Darby Avenue in charge of changing out the marquee visited the school during the quiet of Saturday night, spelled out the Easter Sunday message, then took it down Sunday night.

If the government were truly neutral on religion, this wouldn’t be an issue at all. A school could put up a religious message or a secular one. It would be up to the school. But now, you’ve got Californians bleaching their eyes to unsee the unsolicited mention of Christ.

It sounds like a teacher changed the sign, according to the Blaze. Something tells me that teacher will be looking for work sometimes very soon. I won’t expect the union to have their back.