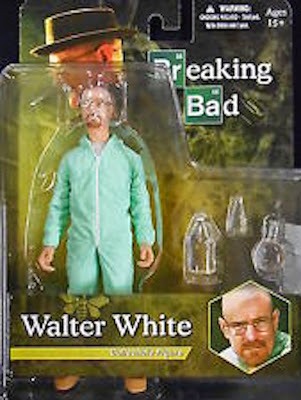 Complete with a detachable bag of meth and wad of cash, Toys R Us is now selling actions figures of Walter White, the evil drug kingpin from the television show Breaking Bad. It’s pretty crazy.

I don’t really see this as a sign of the apocalypse or anything. Hey, I remember Lex Luthor toys and he practically tried to destroy the world a few times over so Walter White can’t be much worse, right?

The thing is, this is for adults. Kids won’t even know who he is. If adults want to buy it to collect it that’s fine. But is it really a toy then? Probably not. But if your kid knows who Walter White is, isn’t your parenting really the problem?

If you ask me, the magazines at the checkout counter of every supermarket concerns me a lot more.