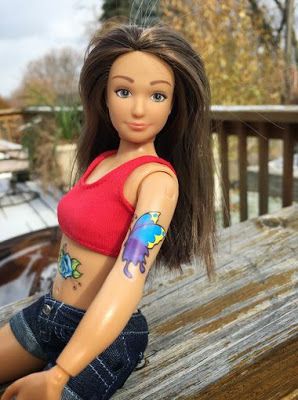 I don’t think my girls ever gave this much thought to their Barbies. Within days of receiving a Barbie, my front room would look like CSI Barbie. There were body parts all over the place. It literally looked like Barbie jumped on the grenade to save the other toys.

But, according to these guys, girls need more realistic Barbies. Me? I just want Barbie limbs not to hurt so much when I step on them.

The Lammily doll, also known as the normal Barbie, is ready to purchase online for about $25.

And a $5.99 sticker extension pack–including 38 reusable stickers–will be available on January 18.

I don’t know. To me she just looks like Beer Ad Barbie. Tell me she doesn’t.