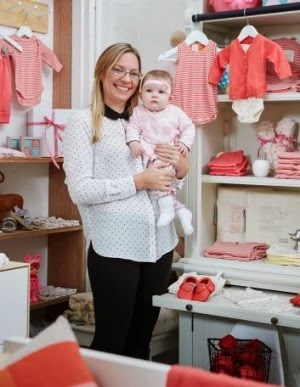 I think future generations will look back on our insane notion of “reproductive rights,” and they will be horrified. Back in the 70s reproductive rights meant terminating a life you already started. Today it also means creating life however you see fit and tossing out whatever doesn’t suit your desires. So not only have we killed tens of millions of our own offspring in the name of these “reproductive rights,” but we have also turned children into accessories, completing our idea of a perfect family, like a well-appointed scarf completes the perfect outfit.

Case in point, this admission of Australian mother, Jayne Cornwill. She proudly proclaims she “paid $50,000” for her girl, Emmerson. After having three sons, Jayne and her husband, healthy and fertile, were “forced” to travel to America and pay fertility doctor, Daniel Potter, to finally give them a girl. See most other civilized countries in the world think that choosing the sex of your child is barbaric and so have outlawed the practice, but here in the Brave New United States, whatever pays, plays.

Jayne was in a tough spot. She lived in a country that frowns on hanging a child’s worth on their gender, but she was suffering from “gender disappointment” and so was compelled to travel to a far off land to relieve her suffering:

I know that, to a childless woman struggling with infertility, I might seem ungrateful because I already have three healthy sons. But unless you’ve experienced “gender disappointment”, you can’t understand how crippling it can be. My desire for a daughter caused me to spiral into depression and left me virtually housebound. Every time I went out, toddlers in pink seemed to taunt me.

Having suffered from debilitating depression that did leave me housebound, I have to comment on Jayne’s “gender disappointment.” At the height of my depressive episodes, I found that I would fixate on something I thought would make me happy. I believed that if I just had that one thing, everything would be better. My whole happiness was contingent on that one thing. At one point, I believed that I would be miserable for the rest of my life if I did not become a nurse. Anyone who knows me would knows that nursing is the last profession I should be in. I found, when my depression was successfully treated, that my fixation was the result of mental illness. Even if I had that one thing, if the depression was still an issue, it would not have made me happy. Frankly, I would have been a miserable nurse. So in my humble opinion, Jayne’s “gender disappointment” did not cause her depression, but was likely a symptom of it.

But here in America, we will cater to anyone’s obsession, if you have the money. Jayne and her husband paid a small fortune to a fertility clinic to make multiple offspring and then throw away the boys. That is how sex selection in IVF works. Many people think clinics just make embryos with the desired gender. The ugly truth is that both genders are conceived, only one gets a chance at life dependent only on whether or not they won the genetic lottery. The rest are likely thrown in the trash or are given to researchers to rip apart for harvestable biological material.

Jayne wants the law in Australia changed because she believes sex selection is good. For her, having the kind of child she wants is part of her reproductive rights:

Because a child’s whole reason for living is only about a mother’s freedoms, not about their own.

I pray that Emmerson is a girlie girl, because if she is grows into anything other than Jayne’s fantasy, I fear for her. When someone pays $50,000 for something, they want what they paid for, in this case, sugar and spice and all that’s nice. If they end up with puppy dog tails, a distinct possibility with three older brothers, I believe that Emmerson will certainly pay the price.

So this is where “reproductive rights” has lead us. Children are accessories for a picture of the “perfect family” instead of gifts to be cherished. Frankly, I fear for the next generation. Everyday we are telling them, “Be what we want or don’t bother living at all.”