NBA Players Gets Booed, Compares Self to Jesus 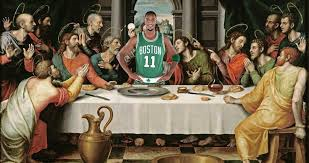 OK. Here’s what not to do when getting booed.

After being traded by the Sixers, Boston Celtics guard Evan Turner returned to Philadelphia and got booed as he was widely considered a disappointment. When asked about it, he said, “I don’t worry about it anymore. I don’t want to sound super weird, but Jesus was hated too. At the end of the day, I just worry about the stuff that’s important. If it makes you happy to boo me, go ahead. I’m still happy. I put all that stuff behind me.”

Really. Dropping the Jesus over a basketball game? Look, Philadelphia booed Santa. They boo everyone.

And athletes who were drafted in the first round and did nothing shouldn’t compare their game to Jesus. Jesus delivered on what He promised.