This Sign Outside a Fireplace is Driving Atheists Crazy 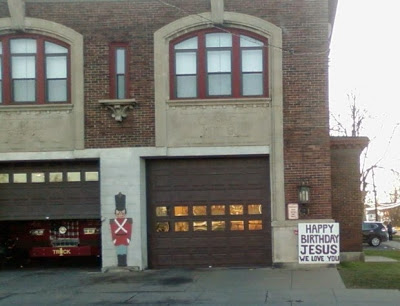 This sign outside a firehouse in Utica, New York, says “Happy Birthday Jesus We Love You” and now the atheist organization The Freedom from Religion Foundation is demanding that the sign be removed.

The organization has sent two notes to Utica area authorities, the first to fire chief Russell Brooks in April 2014, and the second to Utica Mayor Robert Palmieri on December 10th.

Brooks ignored the earlier complaints because the Thomas More Law Center, a conservative legal firm, advised him that the sign was constitutional after a complaint by the ACLU in 2007.

He stated in his response to the Freedom from Religion Foundation: “I was advised by the Thomas Law Center Center that we were well within our tights to display our Christmas sign. In addition, they would support us, as well as any efforts from any organizations looking to prevent us from doing so.”