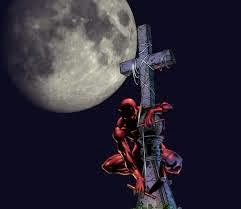 There’s a new Netflix show about the superhero Daredevil, who happens to be Catholic. And there’s been a lot of discussion about how Catholicism is portrayed in the series. Daredevil is like weaponized spandex. He’s a bit…complex. He’s blind but somehow he knows how to fight crime. He’s a public defender and a vigilante. He’s a vigilante and he’s Catholic. And he can afford expensive suits but seems to like wearing spandex more. Hey, don’t judge. There’s a lot going on in this guy’s life. His mom abandoned him in a Church and later became a nun. But don’t worry she comes back sometimes and saves him.

Sheesh. Forget about Daredevil I want to watch the exploits of the mother Nunja. (Yup. I just gave her that name.)

Frank Miller, who wrote Daredevil comics for a while, once said, “I figured Daredevil must be Catholic because only a Catholic could be both an attorney and a vigilante.” I’m not sure if he meant that as a dis or a compliment but I’ll take it as kindly as possible…because I’m Catholic and all.

Daredevil does take the whole “Thou shall not kill” pretty seriously but takes advantage of the lack of rules in the Catholic Catechism that spell out “thou shall not seriously concuss criminals with a large stick and put them into intensive care until they heal enough to be transferred to a maximum security prison where they can escape and cause further mayhem only to be concussed and beaten once again at the hand of our blind spandexed hero.”

Huntress – Her real name is Helena Rosa Bertinelli. With a name like that how could she be anything but Catholic, right? She wears a cross pretty prominently. I’ll admit it. She does tend to leave a pretty substantial body count behind however but nothing a little confession couldn’t take care of. She’s like Batman with less clothes and only half the morals. Even Batman thinks she’s a little rough on criminals. Do you know how nasty you have to be to make Batman consider telling on you?