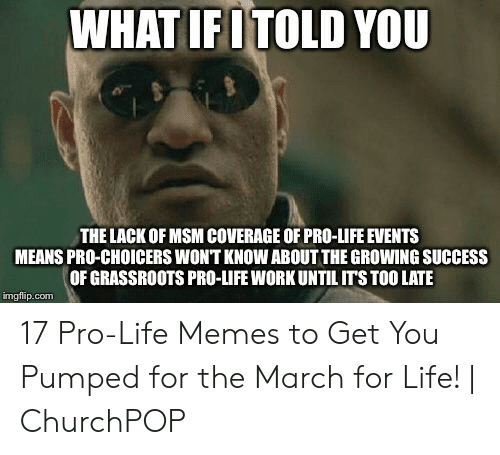 When I was active in political campaigns I attended many GOP functions. I was always amazed how little interest many of the donors and committee people were interested in actual issues. They loved talking about numbers and demographics and electability. That was a big one. Electability. That word came to essentially negate all the real issues. And when someone (like me) wondered aloud whether this candidate or that one was pro-life.

That’s what I’d get. Eye rolls and the look of realization that they’re talking to a nutjob.

About ten years ago, it was a common belief among Republicans that if they could either ignore or ditch the pro-lifers among them, they’d perform better as a party. Many Republican power people truly believed that the pro-lifers must never be appeased. At the most they’d have their candidate throw a bone to pro-lifers by saying they’re against partial birth abortion.

Now, it’s evident that the Democrat party’s commitment to in-utero death is harming them. That’s progress.

Simply put, the Democrats have become so aligned to abortion extremism, so thirsty for the blood money dripping from the corrupt faucets of the Planned Parenthood/NARAL gaggle, that they are willfully isolating themselves in an ideological corner so radical, it is at odds with almost 9 in 10 Americans.
Only 13% of the American public believes that child killing should be allowed at any time during a woman’s pregnancy – including the moments immediately prior to delivery. Yet, the leading Democrat presidential candidates have made very clear that agreement on that point is mandatory for inclusion under their ever-shrinking partisan umbrella.

It’s an interesting thing. Pro-aborts have gotten lazy. I’m serious. They’ve been winning for so long that they didn’t think it was possible to lose.

And the media didn’t help them. The media has run a protection racket for them by not ever ever ever asking Democrat candidates about the issue of life. Never pressing them.

I coach a girls’ basketball team. 7th and 8th graders. The large majority of the girls on my team don’t ever practice. Ever. I knew we likely wouldn’t win many games, given that shooting, dribbling, and athleticism are kind of important. So what I did with my team is we run around like crazy people. We press full court. We double team as often as we can. And it works. Why? Because all these other teams spend 90 percent of their practice time running a few sets of plays that should work I a normal game. And most of the other teams they play just sit back in a zone and allow them to run their play and so they look pretty good.

But the second my girls come out running like crazy and pressing in unpredictable ways, the other team can’t run their plays and they have no idea what to do because they haven’t really practiced any skills. They just know how to run the same three plays. So even though my girls have many disadvantages we win a lot of games because we play with energy and unpredictability.

So back to the pro-life thing. The Democrats have not been ready for the energy and unpredictability of the pro-life community.

The pro-life community has known that the media is not their friend so was forced to take to the internet and radio. And they’ve flourished. We were forced to think outside the box. But the pro-abortion community has been inside the box for so long, they’ve furnished it. Things have been too cushy. So now we just need to tape up their box and send it with no return address to New York and California.

And that’s exactly what is happening. The Democrat party is racing towards irrelevance in much of the country, except New York and California. That’s why they want to get rid of the electoral college. And if that happens they can go back to living a cushy life. Don’t let them. Make them go to every state and explain why they think an 8 month old fetus is not human. Make them defend the irrational.

And then we have to make sure that we are not stabbed in the back by the weak kneed Republicans who’d rather call themselves “thought leaders” or “the intelligentsia” rather than fight for life with all those weird wild eyed icky Christians.