Wanna’ Know What a Post-Christian Society Looks Like? This Is It. 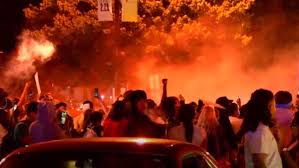 This is because we live in a country that has rejected Christianity. What we’ve lost is the belief that every person is loved by God and we should treat others as we do ourselves. What we’ve lost is a belief in marriage and that it takes a mother and a father to raise a child.

The truth is that Christianity has acted as the foundation of our entire system since the beginning. All of our rights rest on the belief that they come from our Creator. And like a cultural game of Jenga, at some point when enough of the foundation is removed, everything tumbles down.

We are no longer guided by our Christian faith. So now that we’ve ditched the Ten Commandments we have speech codes, human rights councils, and lawyers. Far from liberating ourselves we’ve buried ourselves in rules. So many rules. All these rules are supposed to protect us from the consequences of our cruelty. But without our Christianity we are not seeking to become kinder but simply avoid the consequences of our cruelty. Without love we will require more and more laws.

As love is pushed away, I suspect cruelty will be unleashed even further in the near future. Our liberation from Christianity will enslave us.

Wanna’ know what a post-Christian society looks like? We’ve living in it.