Evil Has No Better Ally Than Cowardice. John Roberts Edition 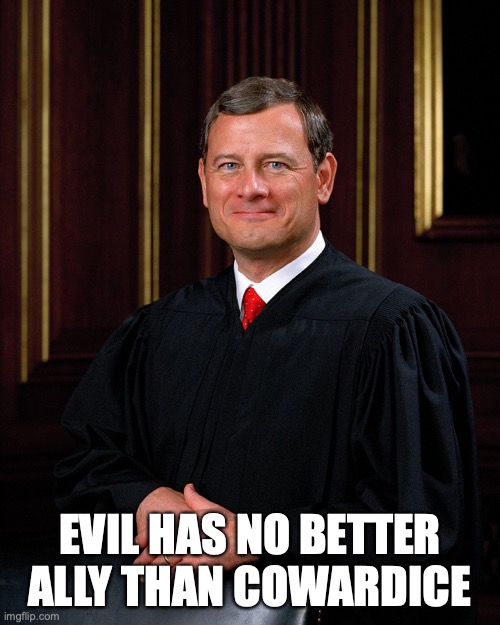 Supreme Court Chief Justice John Roberts reportedly hates Donald Trump.  Is that why he’s ruling with the liberal judges on pretty much everything of import recently. Is that why he decided to allow the Democrats to steal Pennsylvania by allowing non-postmarked ballots up to three days after Election Day.

So even if Trump is a bit ahead on Election Day, the left will know exactly what they need to do over the next 72 hours in Philadelphia and Pittsburgh with absolutely no oversight. John Roberts essentially just took PA off the electoral college map. He handed them the state.
The reason for mail in balloting was supposed to be the coronavirus. But Pennsylvania has opened back up.  But still the mail in balloting continues. This is a disaster.
This man’s cowardice or spite (or perhaps he’s compromised?) is why we so desperately need Judge Amy Coney Barrett on the bench. I just don’t see how this election doesn’t up being heard by the US Supreme Court.
Could you imagine this spineless blob in a black robe standing up to the left on an issue like abortion? Not a chance.