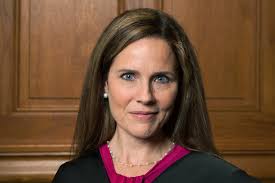 The Boston Globe hilariously wants ACB to recuse herself from any cases involving the election.

President Donald Trump made it crystal clear, even before he nominated Justice Amy Coney Barrett to the Supreme Court, that her swift confirmation was needed to help him win the election, should the court play a role in deciding it.

That fact alone should disqualify Barrett from participation in any election-related challenge that reaches the court. Supreme Court justices, after all, are supposed to be independent arbiters, not political handmaidens. But the legal and ethical requirement that Barrett refrain from considering any such case goes far beyond that. If Barrett cares about the court, her role on it, and the trust Americans have in the judiciary’s duty to protect the rule of law, she must recuse herself…

Her failure to do so will render the court a mere arm of the executive branch in the eyes of the American public, a political actor made up of jurists more interested in dancing with the ones who brung ’em than impartially ruling based on the letter of the law and the Constitution.

“If Barrett does not recuse herself, she will harm the court and she will harm her own reputation,” said Stephen Gillers, a professor at New York University School of Law and an expert on ethical rules governing attorneys and judges.

US law requires federal judges, including Supreme Court justices, to recuse themselves from considering cases in which they have a bias or conflict of interest.

But unlike other members of the federal judiciary, Supreme Court justices are left to determine for themselves whether such a conflict exists. Usually, they do so only when they have a financial interest in the outcome, such as stock ownership in a company that is a party to a case.

I love it. Love it. The news media is completely silent about this horrific display of voter fraud taking place in our country but yeah, we’re supposed to take them seriously when they say a Supreme Court Justice should recuse herself because…well…it would look bad to them.

Well pal, the whole entire country looks like a certified crapshow right now. We’re all filled up on stupid and crazy, why don’t you go back to writing about how much you don’t like Trump.

Amy Coney Barrett could swing the court on this awful election. And I will giggle for days and weeks.