We are Not Who We Think We Are 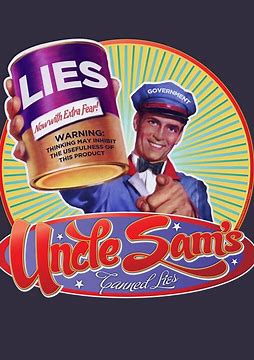 While a Pew Research Center survey said that it was mostly Republicans who believed that election fraud occurred, the new McLaughlin & Associates poll found that all voters, by a 46%-45% margin, believed that there was fraud.”

But still, the media, the government, and Big Tech demand silence. They are pretending that something is true that a majority in the country believe is not true.
We are a country pretending to be another country. That can not last very long.

The government is suppose to be “We the people.” It is not. It has morphed into a “them.”

The media is supposed to be our voice. But they are part of the state. They no longer speak for
us. They lecture us. We cannot be trusted with the truth. We must be managed. Handled. Look at how many journalists join each Democratic administration and go back and forth. They are together. They are “them.” And we’re still just “we the people.”
And, I ask you, what is the one thing that makes us unruly, uncontrollable? It is our faith. Someone devoted to God is not controllable. That is why they intend to, not stamp Christianity out, but hollow it out. They seek to reinvent Christianity. Look. at what China did. They simply invented a state sponsored Church, hollowed of its real meaning.
Joe Biden is a Catholic. He tells us so. All the time. “Devout.” That’s the word the media uses to describe his Catholicism. Please recall that the Washington Post recently said:

Despite these divisions, Biden is poised to make his mark on American Catholicism. For the next four years, the country will see its president go to Mass every Sunday, take out a rosary at times of contemplation, and quote his favorite childhood nuns and Catholic poets. And it will watch him try to navigate polarizing issues of special interest to his church that John F. Kennedy never had to take a position on — abortion, LGBTQ rights and climate change among them.

“It’s potentially a game-changer in American politics,” said Kathleen Sprows Cummings, head of the Cushwa Center for the Study of American Catholicism at the University of Notre Dame. When Biden has spoken in detail about his faith, he has emphasized the values of welcome and decency, and that the worst sin is the abuse of power. With those images in the White House, Cummings said, “there is a potential to expand our national conversation about faith in public life beyond the abortion question. When you look at the whole picture you see someone who is a person of faith in a way [President] Trump is clearly not. Trump focuses on this world and on himself.”

It’s interesting. When I speak of faith, I talk about how it changes me. When they speak of faith they mean how their influence changes others.
It is us. And it is them. I pray for everyone. I don’t see a resolution to this mess, other than a mass conversion. So that’s what I pray for.