Planned Parenthood Disavows Sanger as Racist So It Can Get Back to Killing Minority Children. 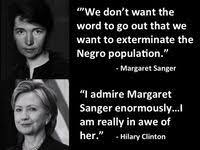 Hey, it only took 100 years! We’ve been saying all this for years but it’s been ignored. But hey, welcome to the party pals.

“Up until now, Planned Parenthood has failed to own the impact of our founder’s actions. We have defended Sanger as a protector of bodily autonomy and self-determination, while excusing her association with white supremacist groups and eugenics as an unfortunate ‘product of her time,'” Johnson wrote in the op-ed.

“Until recently, we have hidden behind the assertion that her beliefs were the norm for people of her class and era, always being sure to name her work alongside that of W.E.B. Dubois and other Black freedom fighters. But the facts are complicated,” she continued.

Sanger once spoke to the Ku Klux Klan in New Jersey to hype up birth control, noted Johnson while pointing out examples of her shamed history. She also “endorsed” a Supreme Court decision that led to state-controlled sterilization attempts, Johnson said. This decision allowed the government to sterilize people it deemed “unfit” to have kids, usually without their consent or knowledge.

Germany also established a forced sterilization program in the 1930s, which Sanger supported.

“I admire the courage of a government that takes a stand on sterilization of the unfit and second, my admiration is subject to the interpretation of the word ‘unfit,'” Sanger said in praise of the program. “If by ‘unfit’ is meant the physical or mental defects of a human being, that is an admirable gesture, but if ‘unfit’ refers to races or religions, then that is another matter, which I frankly deplore.”

Hmmmm. I wonder if Snopes will now be forced to fix their “debunking” of this. I also wonder if Hillary will have to take back her effusive praise of the racist child hating Sanger.

Planned Parenthood must be so relieved to shed their racist past so now they can get back to killing minority children without any aura of racism at all surrounding their murderous profiteering.