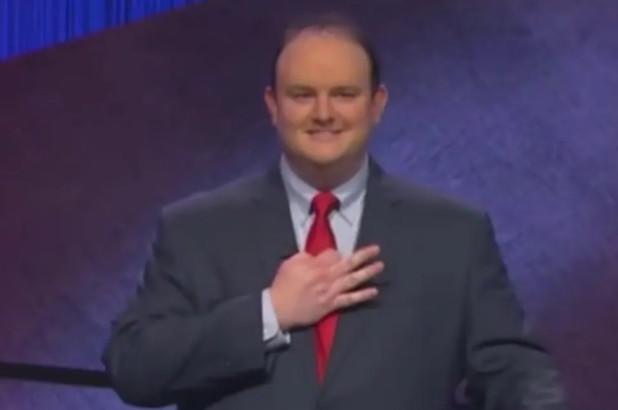 This is seriously the stupidest thing I’ve ever written about. And I’ve written about my kids so that’s really saying something.

A group of 467 alleged former Jeopardy! participants issued an open letter on Medium Wednesday, demanding an apology from the show producers for not catching a “Jeopardy!” winner allegedly flashing a white power hand gesture.

What?!!! Jeapordy had a Klan member on the show and nobody said anything?

This guy, Kelly Donohue, had won three games of Jeapordy and was therefore holding up three fingers.

The woke scolds wrote, “A recent contestant has caused concern among ‘Jeopardy!’ viewers for two separate occurrences, and we, as former contestants, feel the need to speak out against the messaging that these choices communicated — either intentionally or unintentionally — by the contestant Kelly Donohue and, implicitly by association, the producers of ‘Jeopardy!’”

The Medium story claimed the move was similar to a gesture used by white power groups, alt-right groups, and the anti-government Three Percenters.

Could you imagine having so little in your life that you’re waiting for something you can reimagine into some nefarious symbol of a hateful cabal.