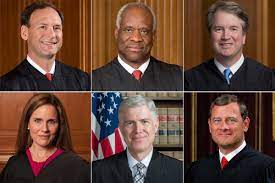 The Supreme Court has agreed to hear a major abortion case from Mississippi that could act as a test care in establishing limits on Roe v. Wade.

The hope that the court will once again make it legal for states to at least protect some life will rest on Thomas, Alito, Gorsuch, Kavanaugh and Barrett.

Some of them seem pretty shaky to me but I’m hoping and praying.

“The top court announced in an order that it will hear the dispute, Dobbs vs. Jackson Women’s Health Organization, 19-1392. The court will hear the case in its term beginning in October and a decision is likely to come by June 2022.

The case concerns a Mississippi abortion law passed in 2018 that bars abortions after 15 weeks with limited exceptions. The law was blocked by the 5th U.S. Circuit Court of Appeals. Under existing Supreme Court precedent, states may not ban abortions that occur prior to fetal viability, generally around 22 weeks or later.

In the case, Mississippi is asking the justices to reexamine that viability standard. The state argued that the viability rule prevented states from adequately defending maternal health and potential life.

“It is well past time for the Court to revisit the wisdom of the viability bright-line rule,” Mississippi Attorney General Lynn Fitch wrote in a brief filed with the justices.

The Mississippi abortion clinic that challenged the law, Jackson Women’s Health Organization, urged the top court not to take the case.

“In an unbroken line of decisions over the last fifty years, this Court has held that the Constitution guarantees each person the right to decide whether to continue a pre-viability pregnancy,” Hillary Schneller, an attorney representing the clinic, wrote in a filing.

Schneller said that Mississippi’s argument was “based on a misunderstanding of the core principle of” previous Supreme Court decisions.

She wrote, “while the State has interests throughout pregnancy, ‘[b]efore viability, the State’s interests are not strong enough to support a prohibition of abortion.’”

Conservatives have been passing a flurry of bills challenging Roe, decided in 1973, with the hope of getting the court to reconsider its past precedents. With Trump’s appointees, the nation’s highest court now has a 6-3 conservative majority.”

This could be a great new day. But truth be told I have little confidence in some of these allegedly “conservative” justices. This will be a great litmus test to see how far we’ve actually come. If nothing else, it’s good to at least know how far we have to go.