9th Circuit Stands Against Satan, Tossing Everything I Thought I Knew About Jurisprudence. 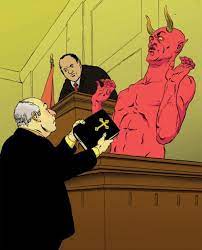 So the Satanic Temple wants to offer an invocation at a city council meeting. They had little interest in actually offering a prayer. Their real reason was to be so ridiculous and offensive that perhaps the city council would consider dropping the prayer altogether.

The Satanic Temple Inc. and a number of affiliated plaintiffs sued the City of Scottsdale in federal court alleging that it had discriminated against it on the basis of its religious beliefs, after the city declined to permit temple officials to give a religious invocation at a City Council meeting, according to documents filed Tuesday in the 9th U.S. Circuit Court of Appeals in San Francisco.

After a two-day bench trial, a federal district court in Arizona entered judgment in favor of the city, finding that the temple “had failed to prove by a preponderance of the evidence that the City had discriminated against (it) on the basis of (the temple’s) religious beliefs or identity.”

Perhaps the most shocking thing is that the 9th Circuit didn’t side with Satan. Come on, who could’ve seen this coming?

How did such a thing happen? I’ll give you the one picture answer if you’re interested.

The LA Times wrote last year: “In few places has the (Trump) effect been felt more powerfully than in the sprawling 9th Circuit, which covers California and eight other states. Because of Trump’s success in filling vacancies, the San Francisco-based circuit, long dominated by Democratic appointees, has suddenly shifted to the right, with an even more pronounced tilt expected in the years ahead.

Trump has now named 10 judges to the 9th Circuit — more than one-third of its active judges — compared with seven appointed by President Obama over eight years.

If you’re looking for someone to thank for the 9th circuit standing up to Satanists, it’s the Orange Man. But he had mean tweets so he had to go. Be sure that because of Biden/Harris the federal judiciary will become a lot more Satan friendly. But the tweets will be wonderful.