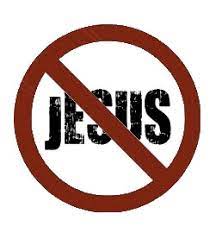 A young woman, Savannah Lefler, was set to deliver the valedictory speech at her Michigan high school. The speech was great…except for this one itty bitty problem. Christ.

The school said her speech was “very Christianized” because she stated her belief that “[t]he purpose of life is to live a life devoted to Christ.”

The school’s principal responded, in part, by suggesting Lefler’s speech wasn’t inclusive enough of other faiths. “We have a diverse student body and staff. It is one of the things I love about the John Glenn community,” said principal Michael Wegher at the end of last month…That diversity goes well beyond race and ethnicity, it certainly would include religious beliefs as well. We have students and staff who would identify as Jewish, Muslim, Buddhist, Hindi, Sikh, Jehovah’s Witness, atheist, etc. We must be inclusive and respectful of their beliefs as well. With this said, we do need to see a revision that sticks to a non-secular [sic] approach. I am not opposed to thanking God for the great honor bestowed upon you, but we cannot take the approach that is currently laid out in your speech.”

In other words, don’t talk about Christ.

Also, is it possible that he doesn’t know what the term “secular” means. He said he wants a revision that takes a “non-secular approach.” And this guy’s in charge?

Anyway, the girl lawyered up. In the infamous words of Obama, “punch back twice as hard.”

This is the second time a school in Michigan did this in recent weeks. The other school folded like Mitt Romney’s spine. This school, however, seems to be still running around in panic mode saying they were just trying to mentor and coach the young woman into giving a good speech.

The young woman’s law firm, First Liberty, argued that the school mistakenly interpreted student speeches as communicating on behalf of the school. However, U.S. Department of Education guidance clearly says that graduation speeches are considered private and constitutionally protected.

In an email, the principal told the young woman: “I appreciate your desire to speak from the heart and share your beliefs and philosophies with others. Unfortunately, we are a public educational institution and must legally abide by the 1st Amendment of the US Constitution. Through past Supreme Court cases, rulings have stated that government institutions, including public schools, cannot favor one religion over any others. This would include honors speeches since it would be an official communication from the school.”

See how that works. You’re in a public school so you can’t ever ever and I mean never ever speak of your Christianity because that would be an official communication of the school since you’re in public school. That’s insanity.

Something tells me that if the kid talked about Allah, this wouldn’t have been an issue.

The larger the state gets, the less room there is for Christianity. For the left, this is a feature, not a bug.