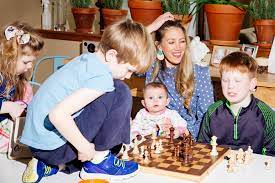 Someone once asked me “how do you do it with so many children?”

I don’t. We do it together.

My wife and I have five children. I don’t think I’d be a very good parent of one child or two. I firmly believe that having many children is easier than just one or two.

When we had our first daughter I was pressed into mind numbing hours of playing dolls and tea parties. Yes, it’s cute and adorable but after a while I could almost feel the IQ points curdling in my cerebellum and oozing from my ears. But just as my last finger hold on sanity slipped we had our second girl and I was thankfully relegated to guest star appearances because my daughter now had a playmate.

There are other advantages to having a big family as well. You don’t have to explicitly teach children with many siblings about patience. They just understand that it’s not always their turn and I can’t drop everything if I have a screaming baby in my arms. And they also learn not to bother me if I’m helping another one with Math, mainly because I get short tempered when Math-ing.

But I no longer even need to understand Math word problems like “How many minutes would it take for a father/child relationship to spiral into confusion and anger if the father hates Math with 110% of his being while the child is ¾ certain that her father will come up with the wrong answer?” How have I been freed from that ghastly parental obligation? Because my oldest child now understands Math so I don’t have to.

Children with siblings also learn early that sometimes you have to clean up messes you didn’t make. That’s called life and will pretty much be the job description of every job you’ll ever have. Sometimes the most effective clean ups are the emergencies that start with, “Uh-oh, Aunt Colleen is stopping by in eight minutes! Let’s make it look like we’re slightly more hygienic than a middle school wrestling team.”

Competition. Everything is a competition in big families and they’re all keeping score. Who reads quicker, drinks milk in fewer gulps, races to the bathroom first? My oldest once challenged her little brother to an ice cream devouring contest. The boy raised his arms in victory just as the brain freeze exploded in his brain making him forget that love and kindness ever existed on this desolate planet. “At least I won,” he wheezed, face down on the table.

“You lost, boy,” his sister responded with a superior smirk. “You definitely lost.”

Children with siblings learn early that life isn’t fair. I think the fact that many young people don’t understand that basic fact directly correlates with not having older siblings giving them noogies just because they were passing them in the hallway.

I read somewhere that many children today aren’t willing to say “no. The things you say “no” to are at least as important as those to which you say “yes.” Well, my kids say “no” to each other about 179 times a day. It’s good practice.

Parents of multiple children can also complain about their children more effectively because having many children proves that nature has a lot more to do with who my kids are than nurture. Let’s face it, you raise the children pretty much the same and one is the president of the Giggly Girls who Love Rainbows Club at school and the other speaks only in threats and braggadocio like a pro wrestler with slightly less spandex and steroids. So when your children misbehave don’t feel bad about it, just blame your spouse’s genes.

There are other advantages to parents of many children such as having drivers. Teenagers want nothing to do with you until the day they get their driver’s permit. Then all of a sudden your presence is very much desired. They think you’re being sooooo nice teaching them to drive but when they get their license they’re now driving the little ones to practice so you don’t go and get guilted into being an assistant coach. So you’re no longer the team uber or coach. #Benefits.
Free babysitting. When your oldest is old enough you have free babysitting. And there’s nothing they can do about it because you don’t give them an allowance so they can’t afford a lawyer or a union.

Hand me downs. We’ve had dresses passed down from the oldest to the youngest. It makes looking at old pictures a little confusing sometimes but we can sometimes figure it out based on how far my hairline had receded in the picture.

Recycling. Don’t tell their teachers but some of our school projects have been recycled. If Ms. Morrow is reading this I’m kidding. (I’m not.)

Kids with siblings also learn balance. I mean, literally. The kids’ rooms are minefields of clothes, legos, and stuffed animals requiring great skill and balance to traverse. I’m convinced my little one will be a favorite for Gold on the Olympic balance beam team. (She might have to lay off the cookies a little but I’ll deal with that later.)

Namecalling. You can occasionally call your child by the wrong name and still not be considered a terrible parent. Anyway, the kids know who you mean just from your tone. If I’m angry, the boy will show up looking guilty no matter whose name I say.

Friendship. My children have many friends. Crying friends, fun loving friends, consoling friends, and crazy friends and they all have the same last name. And they’ll be there forever for each other.

Laughter. My children have learned that laughing just feels better when six other people are laughing with you. The downside of this is that sometimes your younger children will do whatever it takes to get a laugh.

Forgiving. Love can’t truly exist without forgiveness. And when you have seven people crammed into one house there’s plenty of opportunities for forgiveness.

I honestly can’t think of an easier or more effective way to teach children to love than siblings. My children learned to love because there are others around them to love and who love them. To me, raising children with siblings is just easier.
Now if I’m being completely fair, Jesus had no siblings and he turned out pretty great but I think the exception proves the rule.

Matt Archbold is the author of the pro-life Christian novel American Antigone.