Hate Crimes on the Rise Against Catholics. Don’t Worry, They’re Only Catholics. 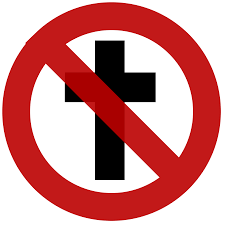 The Federalist reports that hate crimes vs. Catholics are on the rise but nobody seems particularly concerned. And hardly anybody is talking about. Well, that’s what we do here at CMR. We talk Christianity. We talk politics. All the things you were told never to discuss in polite company. Maybe that’s because we’re not polite company or maybe it’s just because we’re not called to hide our faith but proclaim it.

They write: “But while few may know it, over just the past six weeks America has seen a vicious spate of hate crimes targeting Catholics in the United States.

In the Bensonhurst neighborhood of Brooklyn, a vandal hopped the fence surrounding St. Athanasius Church, toppled a beautiful wooden crucifix, shattering it, and then for some reason burned an American flag.

In the nearby Windsor Terrace neighborhood, in the peaceful garden of a church administrative building, a statue of the baby Jesus in his mother’s arms was beheaded.

A week before that, in San Diego, California, three of the century-old stained glass windows in Sacred Heart Catholic Church were shattered, but the vandal wasn’t done: A statue of a kneeling St. Juan Diego, the first indigenous American saint, was decapitated with a stolen fire extinguisher and a dozen other windows were smashed.

One day before that, back in Brooklyn, a statue of Fr. Jerzy Popiełuszko, a Polish martyr beaten to death in 1984 by Communist authorities for daring to stand for freedom, was spray-painted with anti-Polish messages and covered in trash. It wasn’t the first time it had been attacked: In 1990, a vandal spray-painted on the names of Stalin and Lenin, two butchers of the Christian faithful.

On the night of May 2, at St. Charles Borromeo Church in Waltham, Massachusetts, a statue of Christ was decapitated in its church garden.”

Leftism is a religion. It is an inverse of Christian understanding. For martyrdom in Christianity, one stands for faith, truth and love. For adherents to the religion of leftism, one gives themselves to something larger than themselves but it is other individuals who pay for your subservience to your cause. Christianity asks believers to die to self. Socialism asks others to die for your beliefs. In this case, it is Catholics.

But Catholics, especially those icky types who actually believe what the Church teaches, are the most dangerous of all. Their suffering may be necessary. And if not necessary, it is certainly not altogether disagreeable.