Truths that Must Not be Spoken 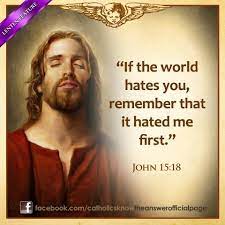 According to a new Rasmussen poll, a majority (51%) of voters believe it is likely that cheating affected the outcome of the 2020 presidential election, including 35% who say it’s very likely.

That must not be spoken about. You do not see that point of view reflected anywhere in the media. In fact, if you speak publicly about it you will be silenced on social media.

A country can not continue this way when people are not allowed to speak.

Many people have great concerns about the Covid vaccine but are not allowed to speak about it. There was a Facebook site for people who suffered an adverse reaction from the vaccine. Hundreds of thousands of people logged on. The entire page was deleted. People telling their own stories were blocked for doing so.

Christians have been seeing this firsthand for some time now. Have you talked about supporting traditional marriage recently online? That will at least get you a shadowban. Try to discuss gender and Christian teaching? That’ll make you persona non grata online.

The leftists’ aim is to have tendrils reaching into nearly every facet of life, including commerce, employment, education, and education. That makes controlling individuals easier because it surrounds the individual with the ever present threat of strangulation. If you resist you will be erased from social media and calls and emails will barrage your employer seeking to have you fired. Why would anyone resist in the face of such power?

This is why resistance movements almost always originate from religion. You can not effectively encircle a man whose eyes are squarely on Heaven. That is why the state will tout the importance of education and private business while subverting it, twisting it, and manipulating it to their own end. Their open wrath and public condemnation is reserved for Christianity, which is more difficult to control.

Love can not be contained by the official structures of the state. I’m talking about real love, not the kind that seeks merely a compromise of horrors or pleads only a moderation of our poison intake. I’m talking about a love that challenges you and changes you. If the God you worship always agrees with you, you’re merely self worshipping.

It’s ironic that what we today call rebels or the resistance are often funded by large banks, conglomerates, and Fortune 500 companies. When the rebellion is sponsored, it makes itself a pawn.

In a world of uncertainty, the left offers certainty. Simply by joining you find yourself on the winning team. You’re on the right side of history, a member of the forever rebellion. The best part is that simply by identifying with this team you no longer have to search for truth or question yourself. There’s no need to search for facts when your opinion is given to you with the imprimatur of the media and the state. You are on the right side of history. You are elite. You are part of the rebellion that never ends.

The movement takes precedence over the individual. It is an inverse of the understanding of martyrdom in Christianity. One gives themselves to something larger than themselves but it is other individuals who pay for your subservience to your cause. Christianity asks believers to die to self. Socialism asks others to die for your beliefs.

The powerful have weaponized people against people. Adherents of this new state religion seek out dissidents, sometimes even creating them from flimsy evdeicne

The pretense we live under is that the power, the real power, despite all appearances is still held secretly by a subversive secret group that must be resisted, defeated, and silenced. There is little doubt that today in the US that maligned group is the faithful Christian. They are called deplorable or the radical far right. They are called racists and homophobes.

We are “othered.” We are dehumanized. Shunned.

We must remember that Jesus said, “If the world hates you, realize that it hated me first.” It is not our job to be liked by the world. It’s our calling to speak truth, evangelize.