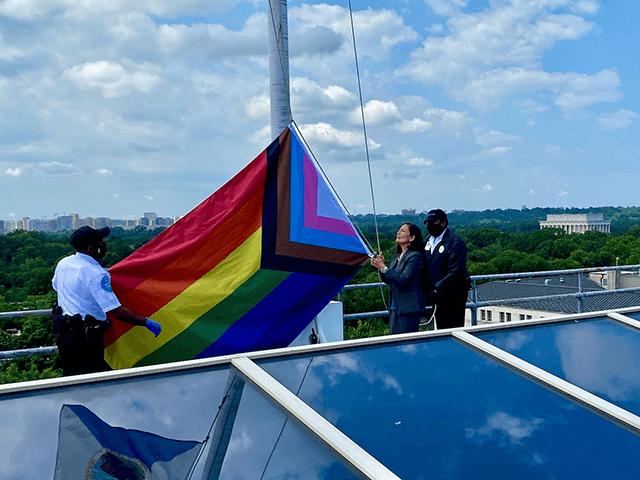 They are trying to rip our country apart. This country was built on the motto, e pluribus unum which means “out of many, one.” This country has always been about inclusivity but now that these maniacs are in charge, we are only about sowing division. Out of one, many.

“Today we celebrate love,” Haaland wrote on social media with a picture of the flag. “For the first time ever, the Progress Pride Flag is raised over Interior. Happy Pride!”

The Progress Pride flag is a revised version of the gay pride rainbow flag, including black and brown stripes to represent gay, lesbian, transgender, and intersex people of color, as well as the colors of the pink and baby blue transgender flag.

Haaland went to the roof of the building herself to hoist the flag above the headquarters of the Interior.”

She said, “I was on Long Island this weekend and visiting a really dear friend and I was really disturbed. I saw you know, dozens and dozens of pick-up trucks with expletives against Joe Biden on the back of them, Trump flags, and in some cases just dozens of American flags which, you know, is also just disturbing because essentially the message was clear. It was: ‘This is my country, this is not your country, I own this.”

This country can not stand if it no longer holds to its ideals. The left is ashamed of this country, its history, and its ideals. Years ago, the left fought against people waving against the Confederate flag. Now they’re against the American flag. This is a revolution. Make no mistake.