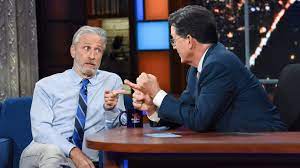 “I think we owe a great debt of gratitude to science,” Jon Stewart said. “Science has, in many ways, helped ease the suffering of this pandemic, which was more than likely caused by science.”

“Do you mean perhaps there’s a chance that this was created in a lab?” Colbert asked as if this was somehow new information that a majority of the country already believed.

“There’s a coronavirus loose in Wuhan, how did that happen?” Stewart asked. “Maybe a bat flew into the cloaca of a Turkey and then it sneezed into my chili and now we all have coronavirus. Like, come on.”

Stewart later spoke about scientists, saying that they just don’t know when to quit. In fact, Stewart believes scientists will be responsible for the end of humanity.

“Here’s how I believe the world ends,” Stewart said. “I say this to you in sincerity… the world ends, the last words man utters are somewhere in a lab, a guy goes, ‘Huh huh, it worked!’”