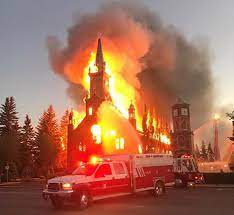 The executive director of the BC Civil Liberties Association (BCCLA) is facing criticism over comments she made on social media in response to the burning of multiple churches in the wake of the discovery of human remains in unmarked graves at former residential schools.

Harsha Walia leads the organization, which fights for civil liberties and human rights. She is also a long-time advocate for migrant justice, Indigenous rights, equality and economic justice.

“This is so explicitly an anti-church hate crime wave and yet Justin Trudeau, who is normally the first and the wokest, waited a week before saying anything and he literally said ‘that’s not the way to go,'” Levant stated.

Silence in the fact of anti-Christian rhetoric leads to vandalism which leads to violence. Make no mistake. This woman will not pay any professional price for saying such a thing. In fact, it will only increase her standing among the left. I’d bet donations go up for this supposedly civil libertarian organization.

And then when the next yahoo comes along he/she/they or xhe will see the blueprint for career success and put it into action. But they’ll ratchet it up a bit. This ends in violence.

She wasn’t alone. Gerald Butts, a former senior advisor to Prime Minister Justin Trudeau, said Tuesday that the arsons “may be understandable.”

And just so you know, Twitter allowed her comment to stand. It also allowed a number of blue checkmarks to cheer her on. And Twitter had no problem allowing their incitements to stand. Because violence against Christians or Christianity is fine. And when it’s fine, it’s encouraged.

We are approaching dark times.