Discovery that Led to Church Arsons Was a Hoax 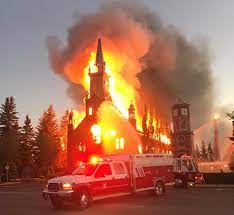 So, in British Columbia there was a discovery that shook the entire country. There was a “discovery” of hundreds of graves of indigenous children found at a Catholic school.

Horrible, right? The “discovery” set off a massive wave of venom toward the Church and spotlighted how the Church treated indigenous populations.

Well, it turns out that they had actually just discovered a graveyard that had been long known to be a graveyard. And it was so large because people sent people there when they had tuberculosis.

But let’s not let facts get in the way of all this arsony fun, amiright?

Lifesitenews.com reports: After initial reports alleged finding “unmarked graves,” a former British Columbia chief has revealed that the existence of these graves is common knowledge, as they are part of an actively-used graveyard.

Former chief of the St Mary’s Indian Band and former student of this school, Sophie Pierre, told Global News that this was not news to the community. “There’s no discovery, we knew it was there, it’s a graveyard,” Pierre said. “The fact there are graves inside a graveyard shouldn’t be a surprise to anyone.”…

Most mainstream media reports blame the Catholic Church, neglecting to mention the excessively high rates of tuberculosis among Indigenous children and the substantial lack of proper financial support from the Canadian government, which forced Indigenous children into those schools in the first place.

Once the government mandated attendance at the schools in the 1920s, children were forcibly removed from their families and parents threatened with prison if they did not comply. Upon arrival at school, children rarely saw their families, with many disappearing or never seeing their families again.

Catholic author Michael O’Brien, who attended residential schools, gave testimony to the Truth and Reconciliation Commission. He previously told LifeSiteNews that the chief underlying issue in the residential school saga was the institutional abuse of children being removed from their families by the state authorities, and then taken to the schools, noting the “long-term psychological and social effects of this.”

An important element to the residential school narrative, often ignored by the mainstream media, is that, citing financial costs, the Department of Indian Affairs refused to ship home the bodies of children who died at the government-mandated schools, meaning that they had to be buried there.”

This “discovery” ignited a national media firestorm and directly led to the arsons of multiple churches. But that’s ok. The facts aren’t right but the narrative is the important thing and the narrative is that the Church is evil. As long as we agree on that, you’re safe.